We just picked this bike up in November ’15. Its been  hit pretty hard in the back end but nothing we can’t fix. The bike is an original Sturgis model with belt drive primary and final. Harley only made them for 3 years, 1980 – 1983. This one shows 34,000 on the odometer and looks to be completely stock except for the typical drag pipes and air cleaner. I don’t know how far I’m going to go on this bike so if you need some original Sturgis parts let me know. There are some salvageable parts and I might be able to save the tin, but……

2/10/16:  I started the tear down yesterday to see what things look like and the “junk pile” is getting pretty big. The swing arm is bent but the mounting holes in the frame line up so I think we are still good. I’ll get some measurements done and decide what I’m going to do next. Unless of course you buy it and then you can tell me what you want!

2/12/16: Kept pulling things apart and down to the primary. Somebody just put a new clutch in, and didn’t do a very good job….. down to engine and trans so we’ll get them out and give the frame a good going over. 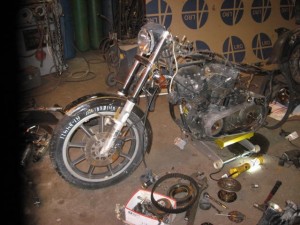 3/4/16: Got everything stripped down and frame mounts all line up and are level. Got the engine and trans out and will go after them after I decide what to do with the frame build. I’ve got a tweaked softail frame and it would be kinda cool to have a shovetail……. 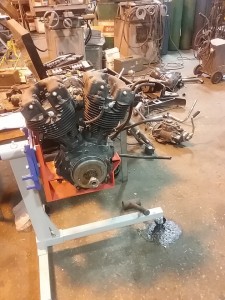 Remember I said I had a tweaked softail frame? After a lot of measuring and pondering, I went after the frame transformation. 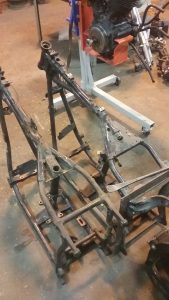 Lets see what we can make happen…. 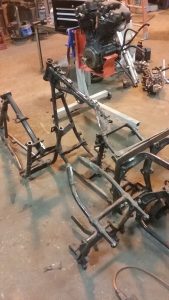 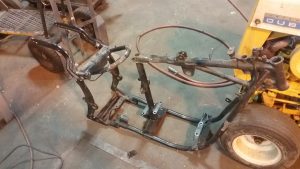 and after looking at how the Softail was put together, the cutting option was pretty clear. Next step is to make some connector stubs for the lower rails and start lining things back up. Its nice to be back at the shop! Even if it is only 6 degrees out….. 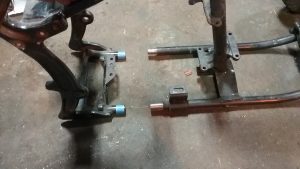 Then we put the two frames together and took some base measurements….. 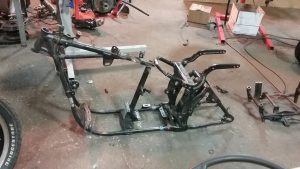 At this point, things look like we should keep moving forward. What I did next was to clean up all the old gussets and brackets. Next step is to mount the swing arm and the front end and jig up the axles so see where we need to adjust things and start welding.

2/15/17: It sure is nice to be at the shop again. We got the frame up and are getting all the dimensions dialed. 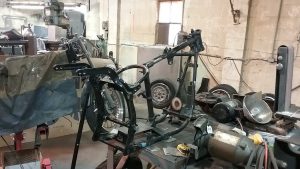 Since our last post we have worked on getting all the parts to update the valve train to the new Evo roller rocker set up. Other than that, not much new…

Almost a year since my last update…. wow…… The 82 Sturgis is down in the new shop with me while I’m on the road. I’ve got the frame welded up and fitting the softail shock brackets on. Clearance is tight under the 4sp trans, but it will work fine. I’ve got a Springer front end on for mock up, but I don’t think its the right look for the bike. I bought new fork tubes for the original front end, but they were 41mm when they arrived…. I like the stock front wheel and would like to go “wide glide” but it doesn’t look the same with the small dia tubes….. we’ll see. Then we’ll see about mounting some 3.5 gal FB tanks. I like the tanks, but I hate the original 2pc mount set up. I don’t want to cut the original off so again, we’ll see….. pics to follow